Sam Howzit via Flickr under a Creative Commons license

These days, we do a lot of our communicating with pictures. We sprinkle our messages with emojis and search for the perfect GIF to express exactly how we feel — it sometimes seems like these images create a language of their own. This often leads people to compare emojis with some of the earliest, image-based forms of human expression. Many begin to wonder, are emojis the new hieroglyphics?

The short answer: well…not really. With guidance from Ruth Kramer, a Professor of Linguistics at Georgetown University and a specialist in Ancient Egyptian, we’ve put together a crash course in this complex, ancient language. Though hieroglyphics only look like a series of simple pictures, the reality is much richer and more complicated.

The Egyptians used hieroglyphics for thousands of years, but their use of the language changed over those millennia. Egyptologists specifically identify five stages in the evolution of the language: Old Egyptian (3000–2000 BCE), Middle Egyptian (2000–1300 BCE), Late Egyptian (1300–700 BCE), Demotic (7th century BCE to 5th century CE), and Coptic (4th to 14th century CE).

Of these five stages, Middle Egyptian is most commonly taught because it has a large variety of texts available for study and because it was spoken during the golden age of Egyptian history. While most Old Egyptian documents that survive are very formal religious texts or tomb inscriptions, surviving Middle Egyptian texts include multiple works of literature, and even personal letters. With these, we can get a glimpse of more informal writing that may have resembled the spoken language more closely.

The Writing System and Making Words

The individual symbols, or “hieroglyphs,” in Middle Egyptian can mean many things depending on the context in which they’re written. Some hieroglyphs indicate certain sounds, the way letters in the Roman alphabet do. For example, the symbol for “hand” roughly corresponds to the sound of the letter “d” in English. As such, you could construct a rough alphabet if you wanted to “spell” something in Ancient Egyptian. “Words Matter” transliterated in this way would look something like this:

However, this alphabet only scrapes the surface. Many hieroglyphs stand for clusters of two or three sounds, and are thus transcribed with multiple letters. And some symbols don’t get their own sound at all! When transcribing Egyptian into the Roman alphabet, then, you need to know — or be able to look up — countless symbols, the sound or sounds they represent, and whether or not it gets a sound at all in the context of the surrounding symbols. That’s a lot of information! Notice how the second word has three hieroglyphs but is transcribed with only two letters? That’s because the third hieroglyph in this case is a silent character included to make the meaning of the word more clear. In this case, the sign combines an image of an alabaster bowl used for ceremonies and a festival tent with a pole in the middle; together, these two images signify that the word has to do with festivals or ceremonies.

Most famously, perhaps, many glyphs are “logograms” — they look like what they stand for. A glyph depicting a sun may simply be the word for “sun” in the sentence, or a drawing of a man may just mean “man.” For this reason, people often compare emojis to hieroglyphics. Compare these two situations, for example: In both sentences, the word “sun” is represented with an image of a sun instead of abstract letters or symbols. Both the emoji and the hieroglyph are working as logograms!

Going a step further, logograms can also be used to express ideas metaphorically attached to a certain image. The sign for “mouth,” for example, also appears in the words for “language” and “name.” 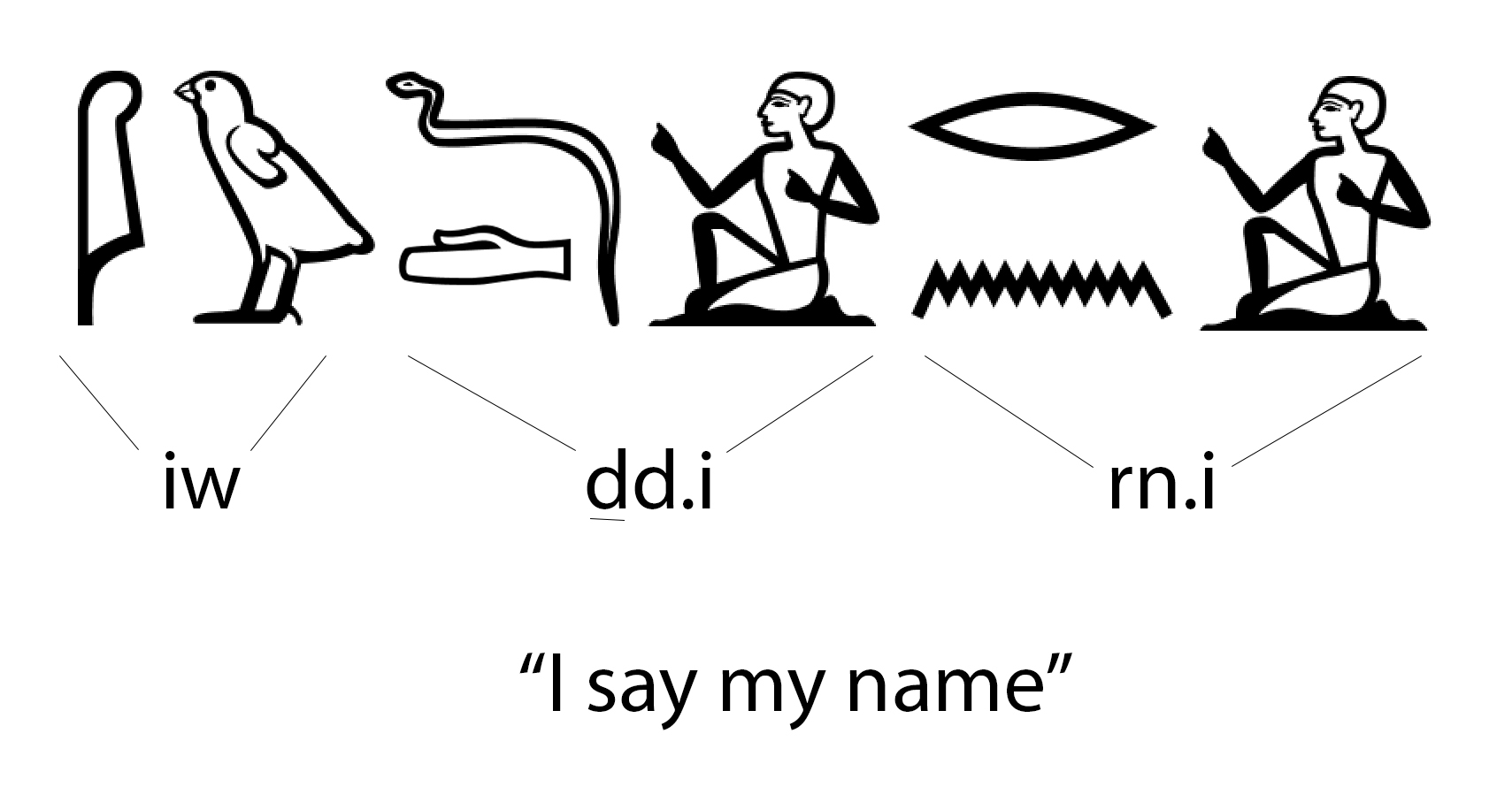 Egyptian hieroglyphs make frequent use of something called the “rebus principle.” In this principle, a symbol for one word is used to stand in for another word that sounds similar. See these contemporary examples: From top to bottom: I can’t bee-leaf it!; Oh deer!; Whale whale whale, look what we have here!

Here, an image of a deer stands in for the identically-pronounced “dear” in the exclamation “oh dear!” In the same way, a bee and a leaf combine to make “believe” (with a little imagination), and three whale emoji translate to “well, well, well.”

Egyptian hieroglyphs do the same thing. The letter “r” is used as a rebus for the preposition “to,” since they are spoken the same way. An image of a certain type of bird, pronounced “sah,” is used in the hieroglyph for “son,” which is also pronounced “sah.” Here, the bird indicates the pronunciation of the word, while the seated man is a silent symbol that specifies that this particular instance of that word means “son.”

Putting It All Together

You may have noticed something tricky about one of the examples above: There are no spaces between the words in Ancient Egyptian! Figuring out word boundaries is a puzzle that takes context clues and, more often than not, time spent poring over Egyptian dictionaries.

Also, it’s important to note that Middle Egyptian is a VSO language: The verb will come first in the sentence, followed by the subject and the object. In the example above, the real word order of “the sun shines” is “shines (wbn) the sun (rc).”

With all of these many rules in mind, here are some examples of how it all fits together!

If you want to be polite, but in a fancy way, you can tell your friend thank you with these symbols: Middle Egyptian uses two genders, which apply with second and third person pronouns. If you wanted to write “I love you” to someone, then, you would need to specify their gender like this: For a more neutral way to say “I love you,” or a way to tell a group of people that you love them, there is a way to pluralize this phrase. The transcription would be identical to the feminine form (mri.i tn), but you would add three vertical lines under the last sign to indicate plurality. If you would like to learn more about Middle Egyptian, Professor Kramer has some suggestions: “Collier and Manley’s How to Read Egyptian Hieroglyphs is a good, basic introduction to the language. James Allen’s Middle Egyptian is more advanced but good for self-study. A good collection of Egyptian texts in translation is called The Literature of Ancient Egypt, edited by Kelly Simpson. Finally, The Keys of Egypt is a light, fun read about the decipherment of hieroglyphs.”

Many thanks to Professor Ruth Kramer for providing guidance, background information, and translation/transcription assistance. Her 2012 article “Egyptian” in Semitic and Afroasiatic: Challenges and Opportunities, ed. Lutz Edzard, was an invaluable resource throughout this process as well.